How to Solo Bake Tezos – A Step-by-Step Guide

WHY IS A GYM TALKING ABOUT THE TEZOS BLOCKCHAIN?

​The quick answer is we're not your conventional gym. By combining state-of-the-art technology with an evidence-based approach to exercise, our clients get measurable results in minimal time while creating an enormous amount of data with every workout.​​

Over the last five-plus years, we've witnessed numerous transformations where clients exercise for less than 45-minutes a week, some as little as 10-minutes a week, and see better results than they ever have.

By using software and analytics to track improvements in strength, intensity, aerobic fitness, body composition, and other KPIs, we've laid the foundation to use science and technology to help combat the current and unsustainable health crisis.

WHERE DOES TEZOS FIT IN?

From the beginning, the goal for us was more than just being a smartgym with thousands of locations around the world.

Similar to how Audi, BMW, Daimler, and Porsche are exploring the Tezos blockchain for use with autonomous vehicle safety standards, or how the French Army's Cybercrime Division is using it to track judicial costs for operational purposes, we envision a world where your exercise, body composition, wearables, healthcare, and health insurance data can all be connected using the Tezos blockchain.

WHY CREATE THIS GUIDE TO BAKING TEZOS?

Tezos already has around 500 baking nodes, which is a lot more than other proof-of-stake blockchains, but increasing the number of nodes helps decentralize and secure the network. Also, by setting up a personal node and solo baking, you can avoid the fees most delegation services charge as well as make sure your vote is included when it comes to protocol upgrades.

Thanks to the help of Jovan Smith from the Tezos community, our founder Josh Jarrett was able to set up his own solo baking node. To pay it forward, Josh put together this step-by-step guide. If you need more support, you can contact Jovan and inquire about his services. There is also an abundance of info on the Tezos website.

Before getting started, it's important to point out the steps below are based on what we're familiar with and comfortable with. There are other ways to build your Tezos Baking setup using other operating systems like Linux or with third-party tools like Kiln. You can research those if that's something you're interested in. Using the Ledger hardware wallet also isn't required but if you don't use one you need to be extremely careful to protect your private keys. This guide assumes you're using a Ledger device.

To set up your Tezos baking node, copy and paste the red commands below (individually) into Terminal on your Mac

You'll have to enter your root password after the next command:
sudo mv opam-2.1.2-x86_64-macos /usr/local/bin/opam

Answer the following prompts with y

Allow Node to Start running for 10-15 minutes until you start seeing blocks being validated, then stop the node by pressing:
control-c

Instead of waiting for the node to sync from scratch, load a snapshot from a trusted source like tezos.giganode.io

You will need to install Ledger Live from ledger.com and install the Tezos Wallet app and Tezos Baking app to your Ledger device

Change the network id NetXdQprcVkpaWU and block level 1382272 to match the most recent block and network id from TzStats, then run the command and confirm the operation on your Ledger device

Where to find the network id and block level on TzStats 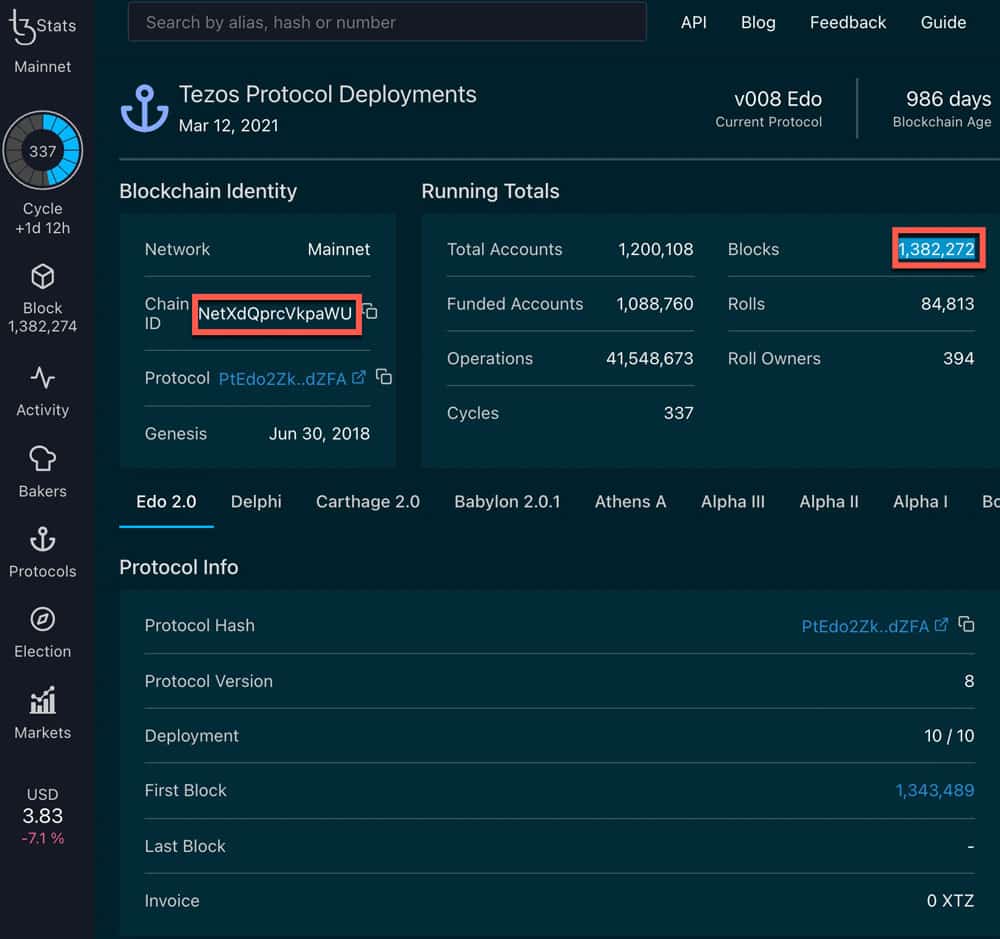 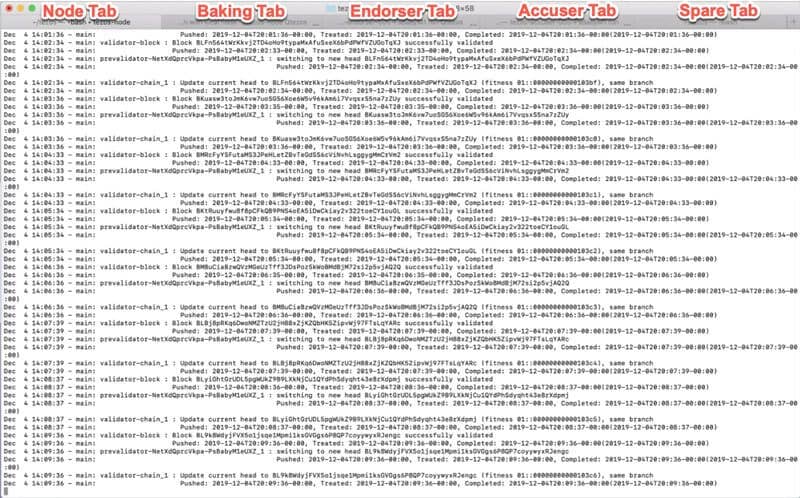 Right now the current protocol is 008-PtEdo2Zk. When the protocol gets upgraded, you will replace 008-PtEdo2Zk in the commands above.

You can find the new protocol name by entering the following command in the Spare Terminal tab:

12. ALERTS FOR MISSED BAKES OR ENDORSEMENTS

Use tzstats.com to see when you're scheduled to bake or endorse your next block.

Take advantage of opportunities when you have a window of time without any blocks to bake or endorse and keep your macOS operating system updated as well as check for any protocol updates. To check for updates, use the Spare Terminal tab:

DON'T FORGET TO RESTART ALL OF YOUR TERMINAL TABS (NODE, BAKER, ENDORSER, AND ACCUSER)

Your node will only be around 10 GB in the beginning. Over time that will start to grow in size. If you ever need to free up hard drive space you can follow these instructions.

Go to the first Terminal tab where your node is running and copy the latest block string (see below). Replace BL36YwsgJFwcs7LNLnFxUXxip6NhvbMUVzii7yxoUoWvHewGC32 in the command below with that block string and enter it in the Spare Terminal tab:

Wait for the snapshot to finish exporting, then follow the commands below:

Note the section of the next command that you need to replace from your own machine
mv context identity.json peers.json store version.json /Users/"your user account on your machine goes here"/a

You will need to enter your root password after the next command
sudo rm -R .tezos-node

Note the section of the next command that you need to replace from your own machine
​mv identity.json /Users/"your user account on your machine goes here"/.tezos-node

​You may need to enter your root password after the next command
sudo rm -R FILE.full

​DON'T FORGET TO RESTART ALL OF YOUR TERMINAL TABS (NODE, BAKER, ENDORSER, AND ACCUSER)

If you've taken the time to get this far and set up your own baker, it only makes sense that you'd also participate in Tezos' governance process.

The best place to stay updated on upgrade proposals is at tezosagora.org. There you can learn what's included in a proposal, follow along with the voting process, as well as participate in community discussions.

The Tezos amendment process begins with the Proposal Period. At the end of the Proposal Period, the network counts the proposal votes. For any proposal to be considered valid, it must have enough upvotes to meet a 5% quorum. If the most upvoted proposal has at least 5% of the number of possible votes supporting it, the proposal proceeds to the Exploration Period. If the 5% quorum is not met, no proposals have been submitted, or there is a tie between proposals, the amendment process resets to a new Proposal Period.

The command to cast your vote during the Proposal Period (you can visit TzStats to grab the protocol hash to replace the PsFLorenaUUuikDWvMDr6fGBRG8kt3e3D3fHoXK1j1BFRxeSH4i placeholder below):

Next is the Exploration Period, where bakers vote on the top-ranked proposal from the Proposal Period using the ballot operation. Bakers get to vote either “Yay”, “Nay”, or “Pass” on a specific proposal. “Pass” just means to abstain from voting for or against a proposal. As in the Proposal Period, a baker's vote is based on the number of rolls in its staking balance at the start of the period. If voting participation meets the quorum, and an 80% supermajority of non-abstaining bakers approves, the proposal proceeds to the Testing Period. If the voting participation fails to achieve the quorum or the 80% supermajority is not met, the amendment process restarts to the beginning of the Proposal Period.

At the end of the Testing Period, the Promotion Period begins. In this period, the network decides whether to adopt the amendment based on off-chain discussions and its behavior during the Testing Period. As in the Exploration Period, bakers submit their votes using the ballot operation, with their votes weighted proportionally to the number of rolls in their staking balance. At the end of the Promotion Period, the network counts the number of votes. If the participation rate reaches the quorum and an 80% supermajority of non-abstaining bakers votes “Yay,” then the proposal is activated as the new mainnet.

During the Exploration Period and Promotion Period you will want to cast your vote (yay, nay, or pass). At a minimum you should submit a Pass vote if you don't feel strongly one way or the other to make sure you are participating in the governance process.

To cast your vote during the Exploration or Promotion Periods (you can visit TzStats to grab the protocol hash to replace the PsFLorenaUUuikDWvMDr6fGBRG8kt3e3D3fHoXK1j1BFRxeSH4i placeholder below):

*sometimes pasting the submit ballot command is finicky. If you have trouble getting your ballot to go through, delete the yay, nay, or pass portion and then re-type it manually. Doing this has worked for me in the past.