What is Adaptive Resistance Exercise (ARX)?

Adaptive resistance exercise with ARX takes isokinetic exercise to the next level and is what allows us to provide you with the most effective workout of your life in as little as 10 minutes a week. Short for Adaptive Resistance Exercise, ARX is scientifically proven to deliver quantifiable results in less time.

ARX technology combines computer-controlled, motorized resistance that is capable of matching the force of any user 100% of the time. This gives you the perfect rep, every rep. With perfect resistance, ARX shortens the time you need to exercise by fatiguing your muscles without needing all those sets and reps like conventional exercise and dramatically increasing the safety and effectiveness of all of your workouts.

It is the first technology created that perfectly accommodates any user’s force output and measures it repeatably and accurately throughout the entire range of motion. Throw in some tracking software for motivation, while quantifying all of the important metrics, and you have ARX – the next generation in exercise equipment!

By utilizing a motorized drive system, ARX equipment delivers perfectly matched resistance 100% of the time. Unlike metal weights that fail to accommodate your changing levels of strength, the resistance provided by ARX can never be excessive or inadequate. 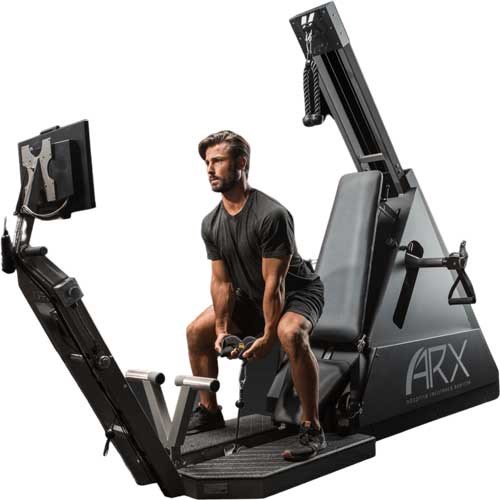 Instead of using weights as a means of resistance, ARX uses finely-tuned motors to provide what is called adaptive resistance; resistance applied to the user only in response to their own effort. Physical effort against resistance is the first step or active ingredient in all exercise, and its downstream effects give us all the health benefits we know and love from training. ARX provides safe, controlled, immediate, infinite, and quantifiable resistance that is of a higher quality than is currently possible with the outdated, gravity-based systems found in gyms worldwide.

ARX empowers and challenges individuals to achieve their fitness goals one perfectly calibrated repetition at a time. No dangerous weights to drop and no adjustments to make, just exact resistance.

Using ARX once or twice a week for 10 minutes stimulates all of the muscle growth I need. I know that sounds ridiculous, but it works!

If you're an entrepreneur committed to optimizing your physiology, ARX must be in your routine. The amount of time and energy you save using ARX is a no-brainer.

ARX is an awesome technology that can get you maximally strong in a very, very short period of time.